The first Mosintuwu Children’s Peace Festival was held to create a meeting space for children from different religions and ethnic backgrounds. 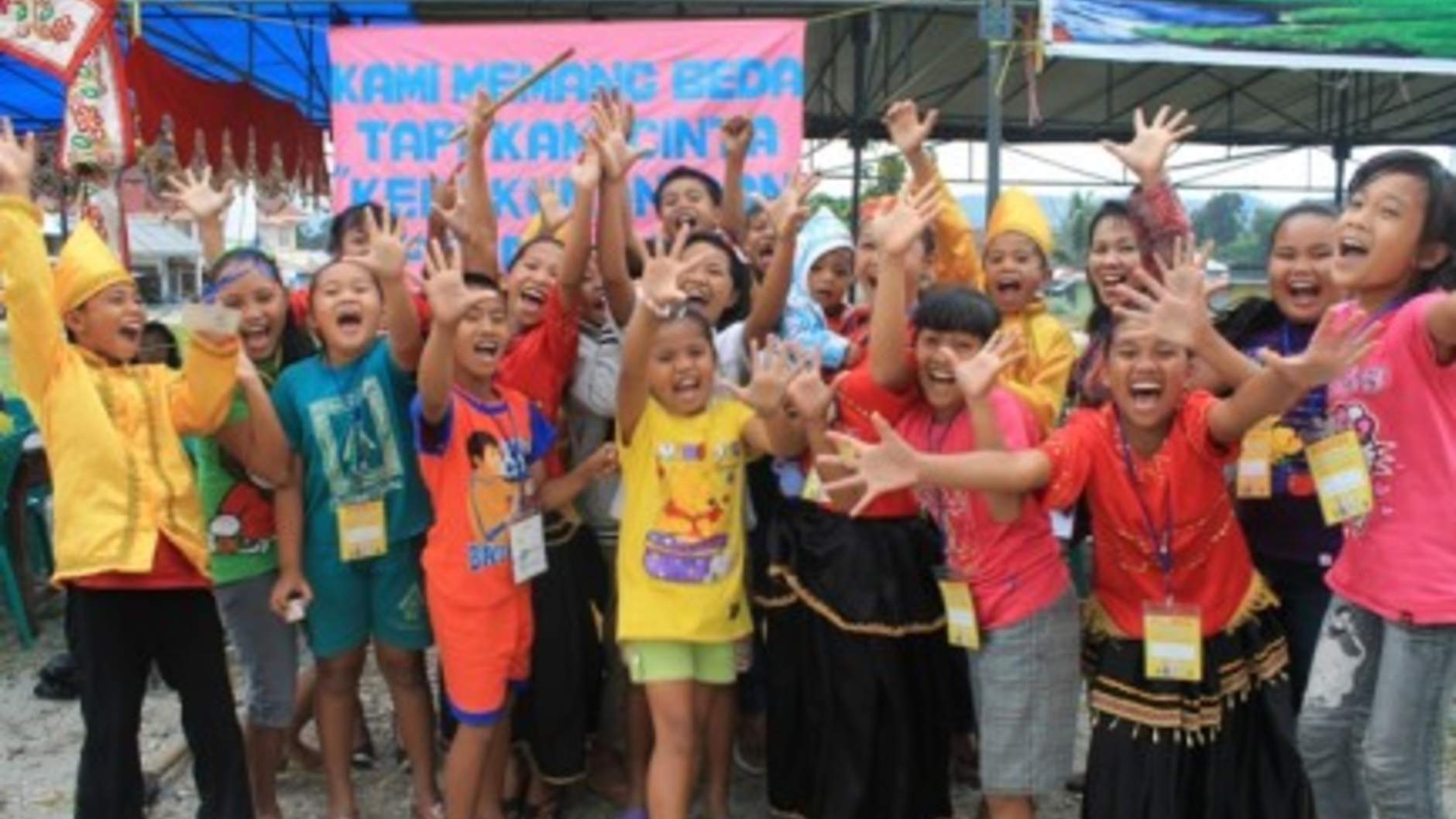 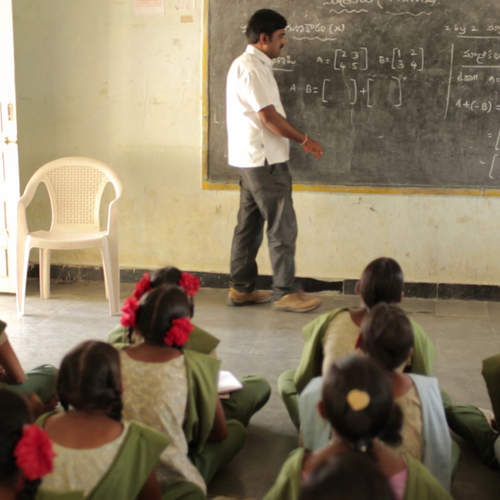 Help create a new generation that can learn together free of prejudice and hate.

Donate to the Schools Across Divides Program ›

The first Mosintuwu Children’s Peace Festival was held to create a meeting space for children from different religions and ethnic backgrounds. It made possible a variety of activities through arts and culture, including an exploration of local wisdom and insight. The Festival’s overall aim is to encourage children’s voices to be heard as we create peace in post-conflict Poso.

The work linked in to Project Sophia (the mobile library for children’s post-conflict organized by the Institute Mosintuwu) inviting children from the same areas covered by the mobile library- 17 villages of 6 sub-districts in two main districts (District Poso and Morowali). The children were divided in to groups that were both religiously and ethnically diverse.

We had a tremendously positive response from the Poso district government, the village government and the people in Poso. They hope that the festival activities can be carried out each year, so that the children from diverse backgrounds and regions can come together, to meet, get acquainted, and develop their creativity through the arts and cultural activities.

The Children’s Festival is funded by money made possible by the Coexist Prize.

Here is what happened!

We Are the Children of Peace:

Children’s Voice for Peace in Poso

“Rata Katumbar!! Our villages were flattened! Raised to the ground. Mosques collapsed, churches collapsed, houses collapsed, everything collapsed. Burnt, destroyed. All we had left were our own hands! But look, now here we are, holding hands together. Not only did we let the bygones be bygones, leaving behind past conflicts, we also wish to look ahead. We came here to show you, we want to hold hands together to build peace. There, look at those children, they are what we want our Poso to become,” tears in her eyes, a fifty-year-old fervent lady from Poso Pesisir claimed enthusiastically on how she put meaning into the Children Peace Festival to everyone swarming on the field that day.

“Since a month ago, people have come to my house bringing their children with them. They brought rice, vegetables, lemons, and some of them money. They are Christians, Moslems, and those who are originally from Bugis, Gorontalo, Mori, Pamona. Regardless their religions and ethnicities, everyone is welcome to get involved in the Festival. But if they could not attend the festival, they said they would support it in any way they can. Mrs. Atin’s hands gestured in her effort to describe the zeal within the people from three areas as they prepared for the Children’s Peace festival “Even the school headmaster wanted to coach them to dance and sing. The village heads wanted to attend and give support. One community member borrowed a car to pick those children up to go to practice. It’s just fantastic!” she continued. (Mrs. Atin is a member in Mosintuwu Women School.)

Mrs. Yanti said, “We are in the fasting month (of Ramadan). Initially, I found it hard to explain to the parents that it was very important we join the festival. Many of them were doubtful. I had to run here and there to persuade them. But for the last month Moslem children from Sayo and Tegalrejo have been practicing in Bukit Bambu, a place where a Christian community resides. Their parents accompany them. The road that cuts through the wood between Bukit Bambu, Tegalrejo and Sayo has been busy with kids going to and from practice. And they are not afraid at all. They look determined. This is the first time since the conflict that we have visited each other. Even my mom insisted that she would come along to the festival since she never went to Tentena because it is a Christian area. Now she is happy to be able to come here in her old age.”

The above expressions are only a small part of many others that were found to be lovely and moving in the course of the Children Peace Festival organized by Mosintuwu Institute. Approximately 500 children from 17 villages out of 6 sub-districts in Poso district and 3 villages from Morowali district came together on July 23-24 to celebrate the national children’s day. Those 17 villages in Poso were the locations where Project Sophia, the mobile library for children, made its trips. They are also the locations of the Mosintuwu Women’s School. An exception was made for Morowali and Pamona Timur for the consideration of their rich culture and background.

There was a festive atmosphere as soon as the children arrived on July 22, 2012. For the majority of them, it was their first ever visit to Tentena, their first time also to come together. They came in trucks with plastic roofs, cars borrowed by their village members and motorbikes. The yards were full of them. They were shy at first, but then they started to make friends with other kids.

On the first day of the festival, the bustle started really early in the morning. In the beginning, it was the carnival. It was introduced by Pamona Puselembah head of sub-district, Drs. Rama Tandawuya. The children were singing and shouting their united chants for peace and diversity. The children were accompanied by their adult chaperons and coaches. They walked on foot for 2 kilometers from Puselembah field to the festival location. Their boisterousness won the local people’s attention. They smiled, laughed and applauded while observing the children in the carnival.

When the carnival ended, things continued with the official opening of the festival conducted by local Poso cultural observer, S. Kampu. Previously, Lian Gogali, the director of Mosintuwu, claimed that the festival was meant for children, for them to celebrate their joy and diversities. They applauded and cheered right after the gong as the opening sign. Instantly, more than one hundred children from the Mosintuwu child center ran out of one corner of the field to perform a mass traditional dance, holding in their hands wooden knives and the soi-soi leaves, one unique leaf from Poso. This mass dance characterized how children build peace and trust towards one another. The dance ended with all the children’s groups performing the moende dance, the traditional local dance that symbolizes brotherhood. The “Anak Perdamaian” (Children of Peace) choir from Poso Kota and a vocal group from the Mosintuwu children’s center also performed the opening rituals.

There was no weariness, even for Moslem children who were fasting. There were two main activities, the art performance and the children’s party. There was a stilt race, more children’s traditional games (lega-lega ananggodi in Poso language) and a contemporary choir performance. Their funny and attractive performance was very appealing for the local people who came to visit the festival. The lega-lega ananggodi caused much hilarity and they cheered for the children to repeat them again.

On the second day, the art performance consisted of a pantomime dance, a dance that resembled the beauty of the nature and culture of Poso. There was also amoende dance (the traditional local dance), which symbolizes peace and brotherhood, it was accompanied with songs with unique lyrics.

The children party was another spirited activity in the festival that involved not only the children’s groups, but also the local children from surrounding neighborhood in Tentena. This program was supported and facilitated by Mosintuwu volunteers from outside Tentena, Jakarta and America. The Children’s party included the loko-loko game, stilts racing, kite-making, mass drawing and other mass games. Booths were installed to exhibit traditional handicrafts, clothing and musical instruments.

Project Sophia also established an exhibition where children were provided with books they could read on the spot, and make their own books. There were two types of self-made books: the talking book and the village book. Children worked in pairs to make talking books and they created a question-answer dialogue. In the village book, children wrote and drew pictures of their daily lives: games they play, their routines, a village map, foods and beverages, plants and animals, etc. There was another booth for the Mosintuwu Garbage Bank where children were encouraged to be creative using non-organic waste products. The garbage bank was just launched and the booth was purposively installed to promote the program and the green-sustainable way of living.

A thousand stories swirled around and in the festival. The message was one of peace, delivered by the children. “I am so happy I could join this festival. I can meet many new friends coming from other places. This is a new experience for me to come here in this new place. Beforehand I could only meet friends in my own school and they are with the same religion as mine,” said Oyan, 11 years old from Morowali. “I made ten new friends. There’s one from Poso Pesisir. That one, in Balinese dress. His name is Made. And there’s another one from Mori. It’s funny how they speak. Most of my new friends are from Lage since we sleep in the same house. Yes, there are Christian kids, and Hindu. I am myself a Moslem,” uttered Didi, a twelve-year old from Sayo village, Poso Kota. Ulin, a ten-year old from Lage had her own story:“Other kids bring their parents here. I came alone. I just recovered from my sickness, but I really wanted to come here to meet other children from many other villages. They are all kind and smart. They dance so well. When I come home later, I will study harder and become better.” Jona, a twelve-year old from Bukit Bambu, timidly shared her story: “This is my first experience, first time in my life to make more than one friend. I had only one friend, now I have many,” said Jona holding up high her ten fingers.

It was no more than two days, yet such experience left a deep impression inside the hearts of those children, as well as those adults accompanying them. The children did not only receive prizes for their involvement and winnings, they also presented a gift for the future Poso. It was their hope for peace. Likewise, they offered their gift to nature by planting a tree seed as a symbol of their concern for the environment. The expressions of hope that the festival would be held every next year kept coming. The calling “Salam Damai” (peace greeting) and “Anak Perdamaian” (children of peace) was enthusiastically responded to: “We are the children of peace.” It went on and on throughout the festival.

The biggest challenge in this festival is a perspective from the coaches of children who saw the festival as an arena of competition. While children have fun finding new friends from different villages and different ethinicity and religions for the first time through the games, the coaches were so busy with preparations for the performing arts competition that there was less opportunity for children to play. Nevertheless, the spirit of sharing the joy of diversity through arts and culture has brought a new way for the future of peace in Poso and the surrounding area, through the voices of children.

Not only is this festival the first ever held in Poso, it is also the first time ever children have gathered from different religions and ethnicities. It was the first time ever since the Poso conflict that hundreds of children and adults from many places, religions and ethnicities held hands to do the Modero dance with the sounds of gongs and drums in the background. There was this special expression on their faces, the feeling of being moved, touched and joyful. It is no longer impossible for them to hope for a real peace. The children voiced it: “We are the children of peace.” They shouted it: “Peace in Sintuwu Maroso land.”